We love Vaughan! Below we have put together some interesting facts about the area. If you want to skip on to information about your ticket, see our Shortcut Menu below.

SHORTCUTS – What You Need To Know Now

Fight a Traffic Ticket in Vaughan 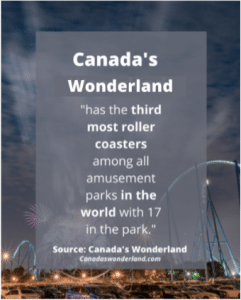 Many individuals are very comfortable living in Vaughan as they genuinely enjoy the advantages of living here. Recreational activities, economic opportunities, safety, inclusive neighbourhoods, and so many other reasons keep residents here.

Similar to other cities in Ontario, Vaughan is multicultural. It is a distinctive representation of Canada’s acceptance of diverse cultures. Vaughan is home to a range of cultures which is evident throughout its neighbourhoods and communities.

Some of the most renowned places in Ontario can be found in Vaughan. One in particular, is Canada’s Wonderland, which attracts innumerable people during its season. Additionally, Vaughan Mills houses over 200 retail stores. Many individuals flock here, as Vaughan has quite a bit to offer.

We should also mention well-known persons such as comedian Russell Peters, TV personality Dina Pugliese, and many other renowned persons who used to walk Vaughan’s streets. Overall, Vaughan is an exciting city.

Although a great town with much to offer, Vaughan is said to have heavy traffic. There could be a number of reasons contributing to this occurrence. However, according to New Canadian Life, its proximity to Toronto is one of the reasons. The assumption is that the traffic and business of Toronto trickles into Vaughan, resulting in high traffic.

Another specific reason highlighted in their blog is the presence of the 400 highway which runs directly through this city.  This highway links a network of highways, connecting “the major hubs of this region and the surrounding area.”1 This interconnection makes the 400 highway very active, as many individuals utilize it for their transportation needs and as a means of keeping them connected to nearby amenities.

Additionally, with Canada’s Wonderland being extremely popular, and Vaughan Mills being a year-round attraction, it is likely that these places attract traffic. Individuals from various regions venture here to experience what Vaughan has to offer. Hence, the inflow of various persons into this region could be a causative factor for traffic. 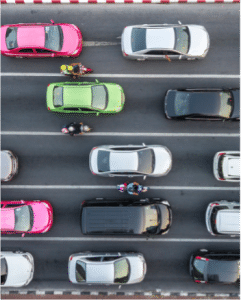 A concentration of more cars on the road has an impact on traffic. Correspondingly, with more vehicles being on the road, collisions are more likely to occur. Studies conducted in places such as Oregon, New York and Romania revealed that as traffic volume increased, accident rates also elevated.2 These findings demonstrated a correlation between congestion and collisions.

In 2017 and 2018, it was documented that the intersection of Highway 7 and Weston Road in Vaughan experienced an extremely high number of collisions, which resulted commonly from drivers following too closely.3

Although Highway 7 and Weston Road were considered problematic, other areas in Vaughan and York Region were also evaluated under this report. Overall the same concern was emphasized—urban areas and roads with high traffic, yield intersections with high collisions.

According to recent news articles, speeding has also contributed to collisions in Vaughan. This traffic violation is quite common in York Region, and other surrounding areas. However, based on reports, excessive speeding has seen an increase since COVID-19. Recent headlines have highlighted the issue of heightened speeding in Vaughan.

Speeding continues to be one of the most common offences for which tickets are issued.

Aitken Robertson Can Defend Against Traffic Violations in Vaughan

Have you received a traffic ticket in Vaughan? By taking the ticket to trial you can fight the chargesTM. The advantage to contesting this ticket is the prospect of avoiding the associated penalties. Hence consequences such as licence suspensions, insurance increases and fines may be reduced or avoided altogether. In all of Ontario, including Vaughan, stunt driving encompasses a range of stunts. These stunts can include wheelies, chasing a car, performing doughnuts, and other related driving behaviours.

The most common stunt involves driving 50km over the speed limit. The consequences stemming from stunt driving include an immediate 30-day administrative licence suspension and a 14-day vehicle impoundment.

If convicted, the penalties are a fine of not less than $2,000, up to $10,000 or to imprisonment for a term up to six months, or to both. In addition, the person’s driver’s licence may be suspended, on a first conviction for up to two years; or on a subsequent conviction, up to 10 years.

Speeding is common in York Region, and in Ontario overall. In Vaughan, speeding is the act of driving a vehicle over the posted speed limit. The same also holds true in other parts of Ontario.

Minor infractions include failing to stop at a stop sign, improper lane changes, broken headlights, and failing to yield.  The consequences related to these offences may include fines, and other penalties such as licence suspensions, depending on the amount of points already existing on the licence, and what type of licence it is. For example, convictions of running a red light and then not wearing a seatbelt a month apart will get a G2 driver suspended for 30 days.

In Ontario cities much like Vaughan, careless driving is the act of operating a vehicle without due care and attention or without reasonable consideration for other persons using the highway. An example of careless driving is falling asleep at the wheel. Careless driving consequences may include fines, licence suspension for up to two years ad imprisonment.

Driving with a Hand-Held Device

Driving with a hand-held in Vaughan is a form of distracted driving. It is the act of using a mobile phone, tablet, or any other handheld communication or entertainment device while operating a vehicle. This is considered a traffic violation because using a technological device while driving is a hazard.

In Vaughan, driving without insurance occurs when a driver operates a vehicle without valid insurance. In some instances, a bounced payment can affect insurance coverage. There are consequences for failing to provide this validation when requested.

The fines for a first offence are between $5,000 and $25,000 and for a second offence the fines are from $10,000 to $50,000.  And, as with all provincial offence fines in Ontario, there is an additional 25% victim fine surcharge on top of the fine amount. Additionally, your driver’s licence may be suspended for up to a year.

Driving with a Suspended Licence

Driving with a suspended licence is a provincial offence, but drivers charged with this offence are in some circumstances also charged with the criminal offence of Operation While Prohibited (sometimes referred to as Driving While Disqualified). If you are found guilty of driving with a suspended licence in Vaughan, and if it is your first offence, the penalties include a minimum $1,000 fine and an additional licence suspension.

If the original suspension was because of certain criminal convictions then the minimum fine is $5.000 and the licence suspension is for a minimum of one year. (A 25 % victim fine charge is mandatory on all fines.) Imprisonment of up to six months is possible and your insurance rates will go up. If it is your second time convicted of this offence, the penalties are even worse.

We understand that when you face a traffic charge or another provincial offence, it is a time of great uncertainty. You face options, important decisions, and possible real changes in your life. At Aitken Robertson we are proud to offer you something that you can count on; our NO SURPRISE fixed quote guarantee. We have been doing this a long time, and know what goes into an effective defence at each stage of the process. We don’t bill by the hour or for travel, which makes the overall cost very predictable and ensures cost-certainty for you. So count on this—if we quote you a price, you will not pay more!

Call us for further details!

All types of convictions will be considered by your insurer for several years, so a minor conviction now and a minor conviction later may cause a pain in your pocket. Although other factors must be considered, at Aitken Robertson we will listen to you and take your goals into account when planning your defence. And then when we break it down, we might find that you may not be in as much trouble as you think!

When speaking to many valued clients, we have come to realize that some have a misconception about demerit points and their effect on insurance and the ability to drive. Insurance companies don’t really look at demerit points when they funnel you into either the mutual or the high-risk market (i.e. low-cost vs. high-cost market). It is the Ministry of Transportation (MTO) that cares very much about demerit points, and if you accumulate too many in a given period, you could end up getting your licence suspended. Some violations come with zero demerit points, and some come with as many as seven. Also, your level of licence (G or G2 for example) will dictate how many demerit points you can accumulate before entering the danger zone in which your licence is at risk.

Call us today to learn more about the difference between minor, major, and serious convictions, as well as the effect of demerit points on your ability to drive.

How Do I Fight a Traffic Ticket in Vaughan? 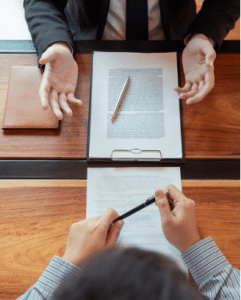 If you get a traffic ticket in Vaughan, there are three options commonly available on the underside or the lower portion of your ticket. Consider choosing the trial option as that would give you a shot at avoiding all the possible penalties and other negative consequences.

Possible penalties such as licence suspensions, demerit points, insurance increases, fines, or jail time can potentially be mitigated or avoided altogether when your traffic ticket is fought in court.

The legal team at Aitken Robertson is committed to helping you fight the chargesTM. We offer free consultations, which will allow you, as well as us, gain a better understanding of your case.

If after the free consultation you decide to retain us, we will work tirelessly to make sure that you get the best outcome possible in your circumstances.

Once understood, we work resolutely to ensure that a fair trial is afforded. Our legal professionals take the time to gather and analyze all the relevant evidence in order to build a sound case in your defence.

Our goal is to make our services accessible to everyone. Hence, we offer a block fee payment method as well as payment options including e-transfer, (which is an option that is consistent with current social distancing protocols). Are you looking to fight a traffic ticket in Vaughan? Call our office to schedule a free consultation.

If you are charged with a traffic ticket in Vaughan, you may be requested to attend one of these two courthouses: 50 High Tech Rd in Richmond Hill, or 17150 Yonge St in Newmarket.

Due to covid-19, appointments may be required for in-person court services and can be booked online. Your trial may be held online. Once your trial is booked, further information providing the details will be provided.

For the Richmond Rill, location specifically, the following parking options are available:

During your time at any of these courthouses, you will likely become hungry at some point. If you are at the Richmond Hill Courthouse, here are a few restaurants to consider:

In Newmarket, these restaurants are a must-try within the area: