If you or someone you know has been arrested, here is an overview of the Ontario bail hearing procedure you can expect.

What To Expect At A Bail Hearing

While Duty Counsel can assist an accused at his or her bail hearing, it is advisable to retain private counsel as an accused only gets one chance at a bail hearing. If an accused does not succeed at the bail hearing, he or she will have to remain in custody until the trial unless a successful bail review (appeal) has been launched . Depending on the jurisdiction, the trial date may be months away.

At the bail hearing it will be determined if the accused will be released from custody for the period leading up to the trial. Generally at a bail hearing, it is the Crown who has to “show cause” as to why an accused should not be released. But in certain cases there is a “reverse onus”, whereby it is the accused who must show the court why his or her detention is not justified.

For an accused to “get bail”, the Court has to believe that if that person released, he or she will come to Court when required, will not be a public safety concern, will not re-offend, and that releasing that accused is not going to undermine public confidence in the justice system.

The surety is usually also liable for a sum of money. Unless the accused lives very far away, the money that the surety pledges is not deposited with the Court. However, if the accused breaches one of the conditions or terms of the release, then the surety stands to lose some or all of the money, or go to jail if the money is not paid. As well, the accused will be charged with another criminal offence.

Sometimes the terms of a bail order include a term that the accused must reside with the surety. Another possible term may be that the accused must remain in the residence (i.e., be under “house arrest”) at all times except while in the direct company of the surety. If there were other people involved in the offence there may be non-communication terms and terms to remain a certain distance away from those people. Several other terms may be included. If the accused does not honour one of the conditions or terms, the surety must call the police.

A surety’s responsibilities continue until either the trial is completed or the accused pleads guilty and is sentenced or all the charges are withdrawn – so it could be a lengthy period of time. A surety may at anytime decide not to continue being a surety. If that is the case, the surety may bring the accused to Court, or come to Court without the accused, and ask to be relieved of the duties. Once that is done, the accused will be arrested.

A good surety should: 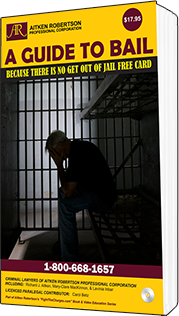